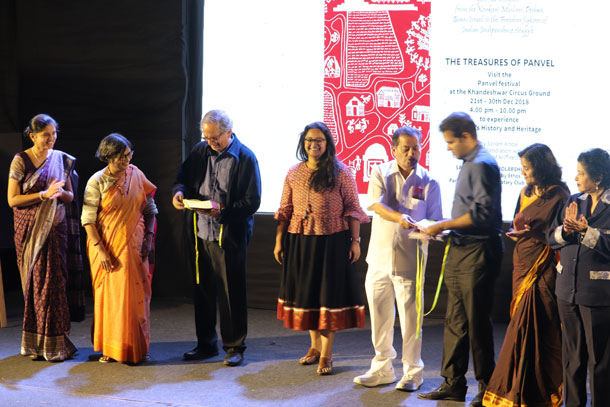 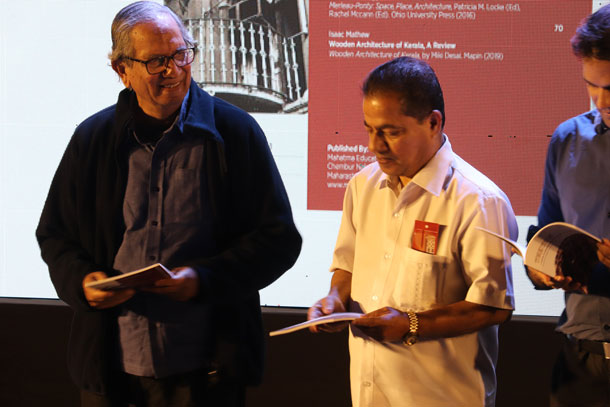 This bi-lingual book is co-authored by Prof. Smita Dalvi and Ar. Sonam Ambe and Marathi translation is by Ms. Seema Hardikar. The book draws upon – ‘Navi Mumbai (Raigad) Heritage Project’, a heritage listing project led by Prof. Smita Dalvi (sponsored by the MMRHCS) and ‘Treasures of Panvel’, an Exhibition created by Ar. Sonam Ambe (through the Saint Gobain Scholarship) in collaboration with MES Pillai College of Architecture, New Panvel.

Panvel is a historic port town and trading centre in the Raigad District of the Konkan region in the Indian state of Maharashtra whose urbanity precedes that of the neighbouring Mumbai. With several archival images and narrative illustrations, the book records and rekindles the memories of a great city whose historic heritage is seen in the form of lakes, wadas and sacred places and contains the stories of its communities. 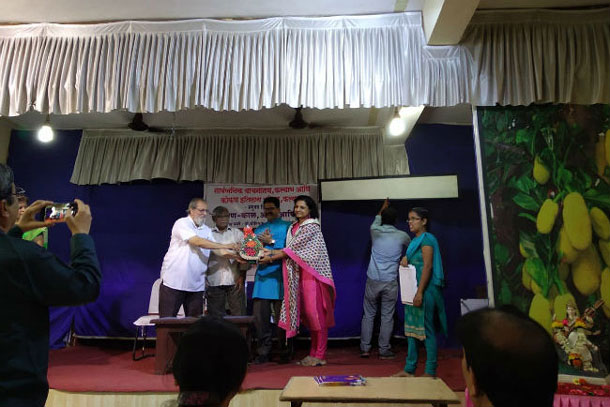 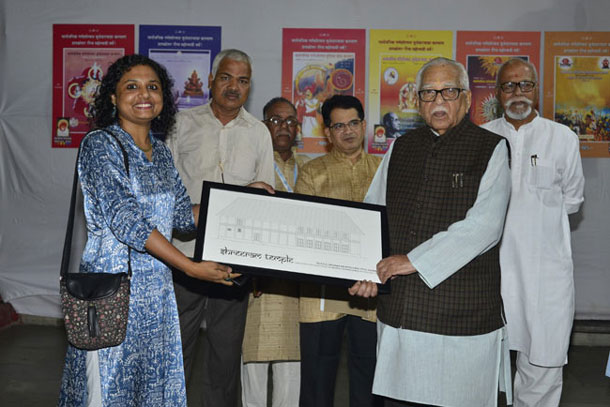 Documenting the rich architectural history and heritage of old Kalyan and generating local awareness for sensitive conservation of the place by Saint Gobain India Pvt. Ltd. in collaboration with Ethos at the Transparence event, Hotel ITC, Grand Chola, Chennai on 15th March, 2019.

Every Year this Saint Gobain scholarship award competition is conducted and the awards are awarded to the students / professional under 30 floating a proposal on creativity in the field of architecture, design, urban design, planning, heritage conservation etc. This year the scholarship was awarded to three projects, one on contextual innovation for houses in Kutch, another on multi functionality of the Tile material in interior spaces and other one i.e. Kalyan – Smruti Gandh by Architect Tejashree Lakras.

With an objective of introducing and implementing, community centred heritage conservation approach for the historic core of Old Kalyan, this Saint Gobain sponsored an year long, research project has produced its first outcome in the form of Public Exhibition showcasing the 8 heritage buildings as representatives of Architectural styles from Kalyan’s history. The first exhibition was inaugurated by Former UP governor Honourable Mr. Ram Naik in September 2019 and was very well received by the local visitors.

Considering that films to be one of the most attractive medium of generating heritage awareness, the project aimed to bring the significance and need of Architectural heritage conservation in the form of a Documentary and has been successfully released the English version at PiCA Alumni organized Mindscape festival at Urban Haat, Belapur in January 2020 and Marathi version of the same at Kalyan Wachanalay in February 2020 along with the display of exhibition of sheets too. This attempt has sown the seeds of heritage awareness in Architecture fraternity and locals of Kalyan. The Marathi version was inaugurated and appreciated by well known historian Dr. Shrinivas Sathe with his own words” Kalyan has failed to receive conservation efforts for very long, the documentary Kalyan- Smruti Gandh would be probably the first and last attempt in bringing sensitive awareness amongst locals.

The project has been travelling to multiple platforms including Kamla Raheja Vidyanidhi institute of Architecture, Juhu, Rizvi College of Architecture, Bandra and so on in order to bring locals and architects into this sensitive process of conservation.

I take this opportunity to thank my entire team of student volunteers from PiCA without whom, this project would have never achieved its goal and to my Friend and colleague Prof. Neha Korde for translating the content so beautifully and my heartfelt thanks to the valuable suggestions given by my mentors Dr. Arif Merchant, Dr. Sudnya Mahimkar and Prof. Smita Dalvi. 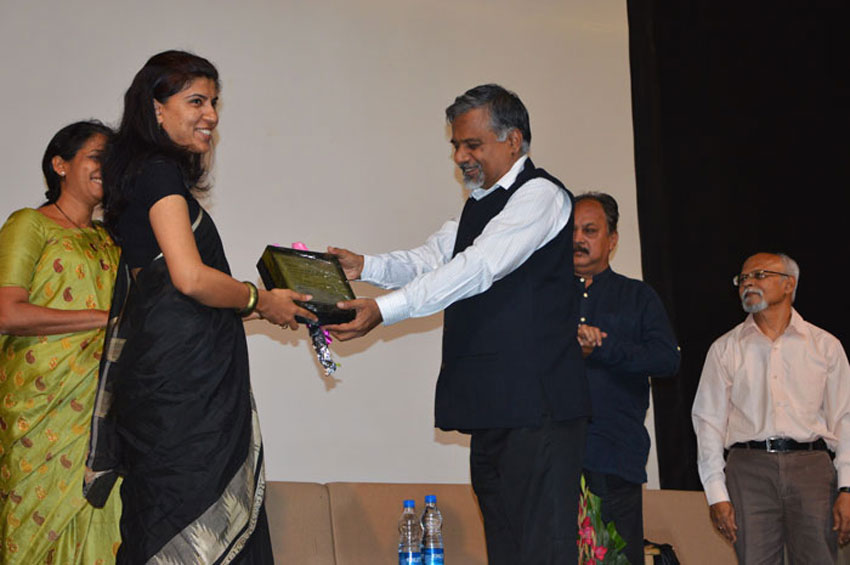 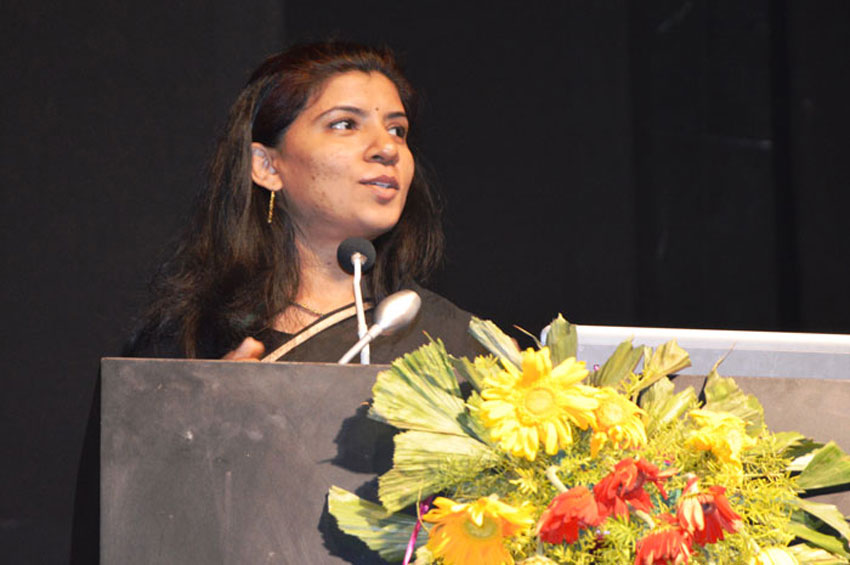 Prof. Sharma speaking at the convention

Prof. Richa Sharma works at Pillai College of Architecture, as Associate Professor and Course Coordinator for the Master’s program in Urban Design. An Architect from Government College of Architecture, Lucknow and Urban Designer from School of Planning and Architecture, New Delhi, Prof. Sharma has been a gold medalist in both her academic courses. Besides teaching, she also freelances as an Architect-Urban Designer and is actively associated with research and documentation based in and around Navi Mumbai and Mumbai. Most of her research work has been read and published at international platforms. Her research interests revolve around the domains of the public realm, urbanism and sustainable development. She has over ten years of experience into the profession and academics.

The M.Arch. Urban Design course at Pillai College of Architecture started in 2011 and is a two year course affiliated to the University of Mumbai. Dr. Arif N. Merchant, Principal, PiCA states, that, the award is indeed a matter of pride and honour for the college and is an assurance of our efforts and endeavours. Prof. Sharma along with the support and guidance of Dr. Merchant have envisioned a range of course initiatives to contribute in delivering industry relevant and socially responsible professionals. ‘To have received the MASA award has been very encouraging and I am deeply humbled by the same. It only motivates me to take on the future with much more commitment and hard work as a teacher, professional and person’ says Prof. Sharma.