Inclusive Social Awareness:
Water is an existential requirement of a human being. Water also has its complex values when it comes to food, religion, culture and the functioning of the environment and ecosystems. The World Water Day celebrates valuing of Water and raises awareness of the global water crisis and a core focus of the observance is to support the achievement of sustainable development goal 6: ‘water and sanitation for all’ by 2030. 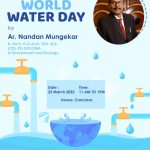 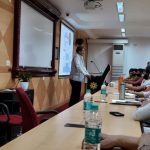 With over exploitation of available resources, it has resulted in the major depletion of the water resource and has started causing imbalance to the livelihoods of millions of people as well as other living organisms. So in context with the growing scarcity, the groundwater which contributes to regular domestic use can no longer be overlooked. The sustainable use of groundwater will be the means of survival and adapting to climate change and meeting the needs of a growing population. So one needs to consciously and strategically be vise on the usage of water and also put on thought of saving of water and restoration of the water table, in turn, regenerating the groundwater.

Rainwater is considered to be the purest form of water. Strategic use of techniques in order to channel the rainwater and recharge the groundwater has to be thought in a very crucial manner.

Anubhooti – MES Pillai College of Architecture’s social service wing along with the SIBC came together and hosted a talk by Prof. Nandan Mungekar on the occasion of World Water Day on 22nd March, 2022 to highlight the importance, safeguard, restoration and the strategic techniques that could be adopted to use rainwater for the domestic purposes.

How was the day celebrated? –
The event was graciously attended by Prof. Nandan Mungekar (Proprietor of Mungekar & Associates) and Dr. Sudnya Mahimkar ma’am, the principal of PICA. The event started with a general introduction to World Water Day, its relevance and the importance of World Water Day. It was then, followed by felicitation by Dr. Sudnya Mahimkar to Prof. Nandan Mungekar.

He also explained how to calculate the rainwater harvesting tank’s capacity with respect to the average rainfall of the season and site area. It further proceeded with understanding the recharging of groundwater and some of the ideas that he had adopted in his projects. He further explained how to identify the location of the water sources with local strategies, for example, the use of coconut. He also showed the adaption of the dowsing technique that could be used for the identification of water sources.

Highlights:
The presentation by Prof. Nandan Mungekar covered an aspect of building service that is the rain water harvesting and its calculation which could be taken forward by the students of PICA in not only their academics but also in their professional life.

He also highlighted the importance of saving of water, safeguarding and restoration of water resources.

Attendance:
The event was successfully attended by the chief guest, faculty members, staff, and the students of Pillai’s College of Architecture.